‘I Hope Bob Iger Has One Foot Out the Door.’ Abigail Disney on Iger’s Stunning Comeback 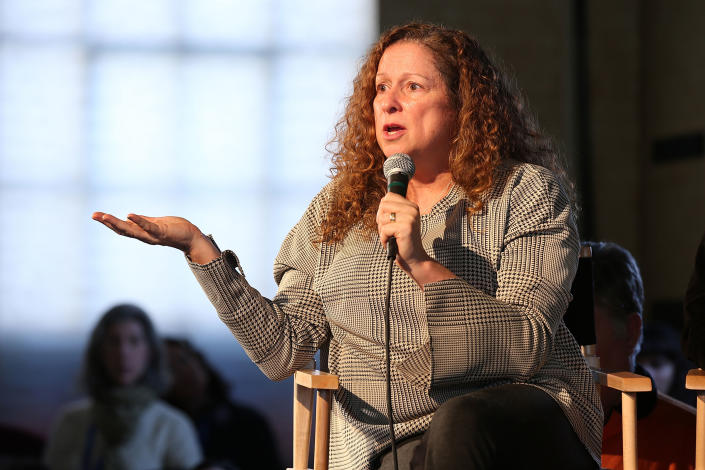 In a move that shocked many on Wall Street and beyond, Disney ousted its chief executive Bob Chapek over the weekend, after less than three years in the job, bringing back his predecessor Bob Iger to run the storied company.

TIME spoke to Disney shareholder Abigail Disney, the granddaughter of Roy Disney, who founded the entertainment giant with his brother Walt, about the latest developments at the company. The film producer and activist released the documentary The American Dream and Other Fairy Tales earlier this year, which examines the widening disparity in the salaries of the workers at Disney’s parks and its top executives, especially that of Bob Iger.

This interview has been condensed and edited for clarity.

You were pretty critical of Bob Iger in your movie American Dream and Other Fairy Tales. What did you feel when you heard he was coming back?

Bob Iger chose to step down just minutes before the pandemic became what was in this country. It was already what it was in China. He knew well what was headed our way, and I didn’t think he wanted to be at the helm when it happened. I think that’s the only thing that explains the rushed nature of his transition because as much as he’d been there for 15 years and there had been talk of succession planning, all of his previous succession plans had gone up in smoke. I think Bob Chapek was the one who happened to be standing around at the time Iger wanted to leave. It’s really important to see his return as a sign that there was a very unsound succession process. There was irresponsibility during [former CEO Michael] Eisner’s term and now irresponsibility during Iger’s term. The weakness of that plan was very clear from the drop with Bob Chapek. He made a lot of rookie mistakes right out of the gate and then he made a whole series of rookie mistakes all along through his tenure. I don’t think he ever moved out of rookie mistake territory. The bottom line is that this was very poor succession planning and the onus of that has to land squarely on Bob Iger’s shoulders as well as the shoulders of the board of directors.

You don’t believe Iger always planned to leave when he did?

I think he always wanted to leave at some point, but the proximal motivation was the way that COVID was looking to come down in the United States. It would be foolish to think of anything else: He left at the end of January. He’d already had a whole series of things in China shut down and he knew what was coming our way. He is not a sloppy man and that was a haphazard departure. I hope it triggers some reflection at the board level because ultimately, this is the board’s job, to hire and fire CEOs. I hope to see something better happening next time around. I hope Bob [Iger] has one foot out the door. The brand is taking a terrible beating right now for a lot of reasons, all of which have the same root cause, which is that the Wall Street ideology about shareholder value has infected every aspect of the way the company runs. That triggers poor behavior on the part of managers towards employees, it triggers poor behavior on the part of the parks around their customers, poor behavior on the part of the channel in the way it treated Scarlett Johansson. They need to have a good long check in with their values, what this company is about and think very carefully about how to go forward without p-ing away their brand.

Your movie deals with the discrepancy between the salary of the CEO and the salary of the park employees. Iger’s new salary is, reportedly, $1 million a year, an extra $1 million for performance, and then $23 million in stock incentives. I wondered if you had any thoughts on that?

It’s like this self-reinforcing circle. If you set up a person’s rewards on the basis of performance, that sounds very sound when you first think about it. But if the only way you measure performance is in share price, then the only way they will perform is around share price. So it’s just this self-confirming logic. I can’t imagine that nobody competent would step up to run a corporation for say $10 million dollars a year or something more rational. And I can’t imagine that a CEO, in good faith, would object to having a more complex measure of success than simply something as blunt and silly as share price. The share price has lost more than 40% of its value in the last two years, which is pretty cataclysmic for people who rely on pension funds and things like that to live their lives. I hate it. But it’s not enough of a way to know if the company is doing well or not. The CEO salary should rise as a company succeeds in its long-term investment in human life and enterprise and that means investing in employees and caring more about your customers than treating them like lemons to be squeezed.

The final straw with Chapek seemed to be the big loss on Disney+ as well as his cavalier attitude towards those losses. Wouldn’t pay employees [more] also cost the company a lot more?

Compared with the losses on streaming, what it would cost to pay employees enough that they would only need one job is nothing, it’s a drop in the bucket. I’m not of the belief that the way Wall Street operates is particularly rational. When the streaming services came online it was the beginning of the pandemic; everybody wanted streaming services. It was a hot moment and so the share price jumped irrationally. Share prices were already high because there was this long honeymoon of very low cost debt that all companies were partying like crazy. But also, Bob Chapek inherited a business plan for streaming that involved Disney losing money for a long time. There isn’t a streaming service that you can name that didn’t lose a ton of money in the process of building its way to profitability. He inherited a business plan that [people] thought was sound. Ssuddenly he’s being punished for something that was always the plan.

Would Disney’s woes ever cause you to disinvest?

Maybe, but it wouldn’t be because I thought the streaming service wasn’t being run well. It would be more a moral decision on my part that the company had totally abandoned the idea that people should be paid fairly and customers should not be abused. While I think it’s dangerously close to that point, I think the better part of valor is to stay and fight.

Who do you blame most for the current turmoil?

Do you sense any opportunity here for Iger to fix the mistakes he made the first time?

It’s an opportunity to press reset for everybody. I really hope he’s done some reflection on the larger questions, not just whether or not he did a good job planning his succession. Disney really is in a bad moment in terms of brand. What it really needs is an injection of that ineffective thing that makes the brand so special. And I really do hope he thinks very seriously about what needs to be reawakened at the company to make it really live over the long term.

It’s really hard to put this into concrete terms because the shift that needs to happen at the company needs to be inside in its soul. You make strategic decisions based on higher principles, hopefully, and the higher principles have sort of disappeared and it’s all strategic decisions now. That’s a great way to lose your way. You get reactive and you just deal with the crisis in front of you. Bob Iger said some really good things about what he would have done differently around [Florida Governor Ron] DeSantis and the ‘don’t say gay’ [legislation] and one of the things he said was that he has a certain set of filters he runs things through as to whether or not it’s appropriate for him to weigh in on: How does this affect our employees? How does this affect the company? How does this affect our customers? And in his view that bill was a terrible threat to all three and that therefore, he would have handled things differently initially than Chapek did.

I think that’s a really good filter to run everything through right now: is everybody thriving? Are customers thriving and employees thriving? I think that those are the questions and then the answers will present themselves. I know that sounds very glib and it’s much easier to say than to do. But I do think there’s a real heart of running things through our deepest moral filters.

Do you wish Iger well?

Yes, I absolutely do. I still insist he’s a nice man, and I think he means well, and I think that he is coming back to the company because he’s troubled by the condition it’s in right now and wants to see it do better. So, I think he’s coming back with good intentions and I give him every benefit of the doubt.