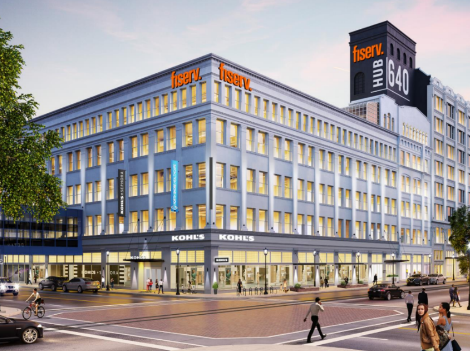 The city Redevelopment Authority board on Thursday endorsed the proposal, which involves creating a district tax incremental financing for that site.

The $7 million would be provided through annual payments for up to 20 years tied to HUB640’s higher property tax bills.

Fiserv is to complete its headquarters move from Brookfield into 144,200 square feet on three floors at HUB640 by 2024.

In addition to the $37 million spent on the project, Fiserv must base at least 780 employees at the downtown site to obtain the full $7 million. That’s according to a pending contract between the company and the city.

Those include $2.5 million spent on changes to West Michigan Street from North Sixth Street to the Milwaukee River such as new pavement, traffic calming measures and protected bike lanes; streetscape and sidewalk improvements around HUB640’s perimeter totaling $1 million; public art and information kiosks in the proposed Vel R. Phillips Plaza, on part of a city-owned parking lot at 401 W. Wisconsin Ave., totaling $750,000; pedestrian path and lighting improvements at Zeidler Square totaling $100,000, and other changes at the West Michigan and North Sixth street intersection totaling $75,000.

HUB640’s higher property value that would generate that public cash is tied to both Fiserv’s future headquarters as well as Kohl’s Corp.’s plans to open a 40,000-square-foot small format department store on the ground floor in fall 2023.

The contract between the city and Fiserv calls for the building’s renovations to start by June 30 and be substantially completed by the end of 2024.

The company expects to have 580 employees in its first year at the new headquarters, with that number rising to 780 by its fourth year. That includes 250 jobs that will be new to the Milwaukee area.

Fiserv must keep its headquarters at HUB640 for at least 16 years. In a nod to the hybrid work model, the contract also says full-time workers must be at the headquarters an average of at least 60% of their time.

Another condition is the city’s standard requirement that Fiserv spend at least 25% of construction and supply costs and 18% of architecture and other professional services costs on certified small business enterprises. Also, unemployed and underemployed city residents must make up at least 40% of construction worker hours.

In addition, either Fiserv or building owner North Wells Capital LLC must ensure that the headquarters’ janitorial, security and food service workers be paid at least $15 per hour through 2024, with an annual escalator of at least 2%.

Financial and payments technology provider Fiserv has been based at 255 Fiserv Drive, in Brookfield Lakes Corporate Center office park, since 1992.

Its headquarters move also is contingent on receiving state tax credits. The amount of those credits has not yet been disclosed.

The Legislature in 2017 approved plans to provide up to $12.5 million to Fiserv if it built its new headquarters in Wisconsin and retained 93% of its jobs.

Fiserv says its moving headquarters to Milwaukee would help it attract employees − a reason cited by other suburban companies that have opened operations in the downtown area.

Fiserv’s downtown development is also part of a company strategy of creating cutting-edge corporate campuses throughout the United States following its $22 billion acquisition of First Data Corp. in 2019.

The HUB640 location is attractive in part because it’s near the Fiserv Forum, which opened in 2018 and has helped “elevate our name,” said Ryan Smith, senior vice president of global tax and incentives.

Fiserv has posted revenue of $13.1 billion and net income of $1.75 billion through the first three quarters of 2022. It had 44,000 employees worldwide at the end of 2021, according to its latest annual report.

Our subscribers make this reporting possible. Please consider supporting local journalism by subscribing to the Journal Sentinel at jsonline.com/deal.

DOWNLOAD THE APP: Get the latest news, sports and more